Old Bennington is a unique village of historic homes from the Revolutionary, Antebellum and Victorian eras.  They remain the finest collection of these architectural styles in all of Vermont.  The dominant architectural style is Federal and homes built later, into the 20th century also favored this style. The village is one mile west of the town of Bennington and has its own governance.  It was designated a National Historic District in 1984.

Directly across from the village green lies a remarkable cemetery of Revolutionary War heroes as well as other notables including Robert Frost and his immediate family.

The Old First Church was restored in 1937 using the original plans of its master builder and architect, Lavius Fillmore. It was the first church in Vermont.  The first minister of this Congregational Church was Rev. Jedidiah Dewey and his home still remains in the village along with the homes of many other early settlers and leaders of this village.

Chartered in 1749 and settled in 1761, we owe a debt of gratitude to Captain Samuel Robinson who discovered Bennington.  Governor Benning Wentworth of New Hampshire had been charged by King George to settle this territory.  Mistaking the Hoosac River for the Hudson River, Robinson upon returning with his soldiers from his exploration of “The Wilderness” known today as Vermont secured the first grant given and named after the governor in 1749. Endowed with natural beauty, located on a wide plateau west of the town Bennington, Old Bennington has become a remarkable place to own a home.

When the post office officially moved in 1848 to what is now known as Bennington, the original settlement became Old Bennington.  Over time Old Bennington evolved into a residential village as businesses moved to the larger community of Bennington.  The village remains largely residential but three small businesses remain as well as an elementary school that is within the regional school system.  The Bennington Museum, also in the Village features a collection of Grandma Moses’s paintings and broad array of items significant to the local history.

One outstanding example of bygone days is reflected in the Walloomsac Inn which was originally built by Jedidiah Dewey’s son Elijah in 1771 and still stands, though closed to the public.   Know originally as The Dewey Tavern until after Elijah’s death in 1818, guests before and after the republic was founded included Benjamin Franklin, Thomas Jefferson and James Madison among other notables of the time. The grandest feature in the village is The Bennington Battle Monument commemorating The Battle of Bennington, a significant turning point in The Revolutionary War.

There are some 82 residences mostly on 2+ acres of land with sidewalks shaded by tall trees. We highly encourage you to get a feel for the village and its history by walking from the Old First Church and cemetery up Monument Avenue, stopping to read the commemorative plaques recognizing our heroes in the Revolutionary War and ending at the Bennington Battle Monument.

We are close to the many cultural and year round recreational activities throughout the region.  If you cherish history and elegant historic and vintage homes you must put this village on your list of possibilities. 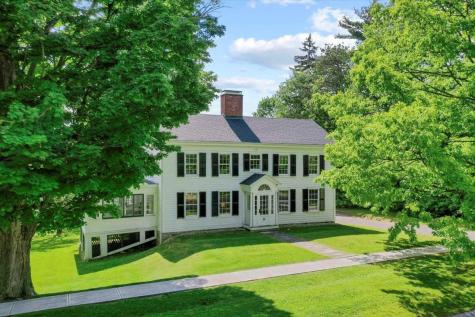 Exceptional historic residence in the heart of Old Bennington! This stately home has been beautifully maintained and is rich in architectural detail including original floor boards, three large fireplaces and exposed beams. Enormous gourmet kitchen with high end appliances, soap stone countertops, a large island, butler's pantry with a second refrigerator and a large seating area. The large living room features a central fireplace, looks onto beautiful Monument Avenue and leads to a large sun porch filled with natural light. The dining room is full of colonial charm and features a huge, original fireplace and is large enough for a banquet size table. This large home has been thoughtfully upgraded throughout the years and has wonderful practical aspects such as full insulation, a large laundry room, walk in coat closet, ample storage throughout and a cavernous basement featuring original stonework. Five bedrooms (two en suite) with beautiful wooden floors and moldings, three and a half baths (all updated) and a large parlor with a wood stove complete this amazing home. The park-like grounds are approximately 2 acres and feature a large two car garage. This is the best of both worlds - living on the most desirable street in southern Vermont with bucolic views to the west and amazing sunsets all year long. Quick trip to train and airport make this an ideal residence for those that require proximity to New York or travel extensively.

Large home in highly desirable historic neighborhood of Old Bennington. Was originally a single family home but currently is setup as a 4 unit. Would take a little work to convert back to a single family. Grand columns, lots of space, large porch and so much more. 7 total bedrooms, 5 and half bathrooms, many possible layouts. Offers 1.56 acres and 4 car detached garage. 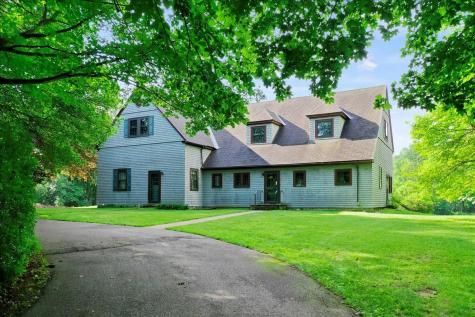 This 1901 Carriage House estate is tucked away waiting for someone to restore it to better than it's original glory! Rare to see this much acreage! Set on almost nine acres of stunning grounds and woods/trails with a view of Mount Anthony, the property sits partially in Old Bennington. Minutes walk to Monument or stroll downtown to shops and restaurants. Inside you'll see gorgeous beadboard walls, stone fireplace, one bedroom/bath existing, sunroom facing Mt Anthony! Comes with new furnace, new windows, and new oil tank. This project is not for the faint at heart but your results will bring you a once in a lifetime home. 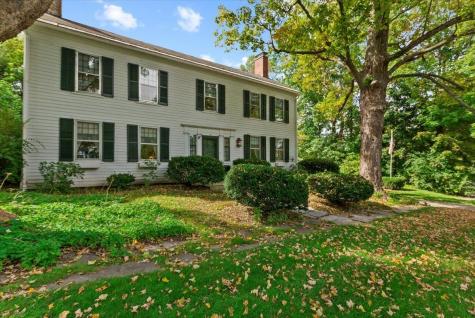 Located on one of the prettiest streets in Bennington, this proud Colonial has been lovingly cared for and is ready to invite you home. Built in 1787, this gem has stood the test of time! Known as the Asa Hyde house, a cabinet maker from Connecticut who came to Bennington to work on the building of the Old First Church. Walk across the street to see his craftsmanship or take a stroll to the Bennington Battle Monument. A short walk to downtown and the Putnam Block with dining, shops and so much more. This grand home has gorgeous wide plank flooring throughout and beautiful exposed beams in the dining room. A lovely guest suite or master suite is located just off the kitchen, and two generous bedrooms (one with a fireplace) plus a study/playroom are on the second floor. Large living room and family rooms are light filled and feature wood burning fireplaces and built in cabinetry. Overlooking the lush back yard and gazebo is a coveted screened-in porch which can be accessed from the foyer, the living room and the dining room. It's the perfect space for al-fresco dining and entertaining! Enjoy the beauty and history of "Picturesque New England" from your front door. This Old Bennington charmer has so much to offer; Three bedrooms, three bathrooms, three fireplaces, an attached garage, and a walkable village location. Easy access to NY and MA.

Copyright 2021 New England Real Estate Network, Inc. All rights reserved. This information is deemed reliable, but not guaranteed. The data relating to real estate for sale on this web site comes in part from the IDX Program of NEREN. The information being provided is for consumers' personal, non-commercial use and may not be used for any purpose other than to identify prospective properties consumers may be interested in purchasing. Data last updated October 24, 2021.