Arlington, Vermont was chartered in 1761 and has approximately 2,700 people and 42 square miles. It serves as the equidistant town between Manchester and Bennington and has its own unique identity which makes it another choice for folks considering Bennington County.

From its very beginnings when it became and independent community, despite its size with locally grown industry such as the Hale and Hawley companies and then later, Mack Molding which is still a dominant employer in the area.

This independence is explicitly expressed in its decision to continue its own Arlington High School and not join the Bennington based Mount Anthony Union High School District because it has its own Secondary School, Arlington Memorial High School, it does not offer school choice like some of the other smaller villages in Bennington County. It also has a great library, the Martha Canfield Library, whose niece was Dorothy Canfield Fisher Author and Activist, who with her husband John donated the original library residence of her Aunt to Arlington with the provision that it remain a library.

The Arlington Park and Recreation Center is amongst the best if not the best in the County and offers, golf, tennis, swimming, volley ball, basketball, baseball, tubing on the Battenkill, a jogging track and picnic area. It is a complete recreational area to be envied by other villages and towns.

Arlington remains a vibrant community with continued good employment at Mack Molding, and Orvis located in the neighboring town of Sunderland.

Notable artists and cartoonist have lived in Arlington none more famous than Norman Rockwell who used many local citizens in his work. Rivers, tall mountains, and history beckon you to small town life not lacking in sophistication. Jump off to Saratoga, Bennington and Manchester events within easy driving distance and venture just a bit further for SPAC, Tanglewood, The Williamstown Theatre and MASS MoCA during summer events.

Perfect opportunity for the family retreat! Bring Everyone there is plenty of room for the remote working family; grandparents, in-laws and friends! The Historic Arlington Inn built in 1847 offers the main inn with full commercial kitchen, two public dining rooms, tavern, grand foyer, and separate innkeepers quarters. Also included are two additional buildings, the carriage house, and the parsonage for a combined total of seventeen guest rooms each with en suites. Beautiful perennials and classic design grace the property. Relax in the gazebo or enjoy the party in the renovated 100 capacity barn with attached deck perfect for a wedding celebration or family gathering. This rare opportunity is nestled in the foothills of the Green Mountains boasting mountain views and the famous Battenkill River just steps away. Come join us in Arlington, Vermont where we have an abundance of natural charms and outdoor recreational opportunities waiting for you to discover.Only 1 hour from Albany, 3 hours from Boston, 3.5 from NYC, and less than 3 hours to Canada. Perfect location to welcome new friends and start your own adventure.Truly a magical experience.

The best mountain views in Southern Vermont! Enjoy spectacular sunsets and unobstructed stargazing. Panoramic vistas from nearly every room. Built in 2004, this Contemporary home has 3 bedrooms, 4.5 baths, and 2 private offices. Kitchen has Dacor stainless appliances and an abundance of storage. Living room features a wood-burning fireplace and cozy sitting area. The dining room, surrounded by windows, flows seamlessly to the covered deck and sprawling patio, perfect for entertaining. All bedrooms are on the main floor, including the Master suite with walk-in-closet and en suite with whirlpool tub. First floor laundry room for convenience. Work from home in total privacy with second floor offices and Comcast high speed internet. Lower level English pub & game room with exit to covered patio with hot tub. Unfinished areas for workshop, storage, gym, or hobbies. Radiant heat throughout, mini splits for central air on the main level. Brand new roof (2020) and solar PV system (2017). Garage parking for 4 vehicles. Set on 18 private acres with a large pond, waterfall and lush lawn. Enjoy world-class fly fishing, kayaking & tubing on the Battenkill, and walk/run/bike on beloved River Road. Become a regular at the Wayside Country Store, where you can stock up on small town charm, deli & baked goods, and all your household supplies. Less than 20 minutes to restaurants & shops in Manchester, 30 mins to Bromley & Bennington, 1 hr to Albany International Airport and 3.5 hrs to NYC. 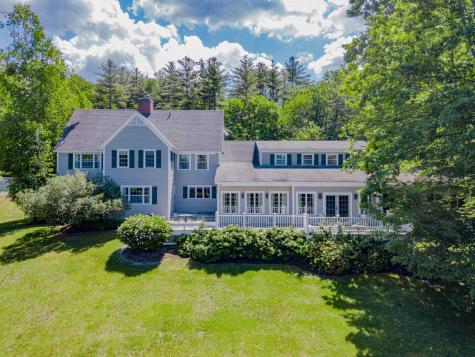 The living is easy in this impressive, and generously proportioned contemporary cape residence on over 85 acres of wooded land bordered by the Roaring Branch River and affording a virtual private playground for taking in panoramic views, hiking and cross country skiing. The residence floor plan encompasses five spacious bedrooms, four baths, expansive kitchen and adjoining dining room, fireplaces in the living room, den and first floor bedroom. The family room adjoins an enormous screened in porch with a wrap around deck to take in the mountain views. A Plexipave surface tennis court continues the recreational opportunities for this unique and special offering. 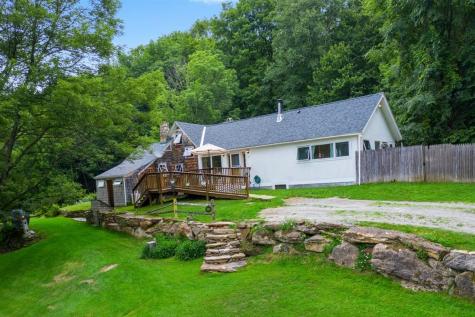 This property defines Vermont with 168 acres, if you're looking for total privacy in a wooded setting w/pond & seasonal brook. It has been in the same family for over 60 years & has grown from a summer cottage to a year round home & amazing dog kennel/ training facility that has numerous other animal husbandry uses. There is an extraordinary dog run from the house, 6 stall dog kennel w/runs (heated) & a wonderful historic barn/garage with 2 stories. Last but not least there is a separate studio filled with light and ready for your avocation or work program. The house is super comfortable with Vt. charm Including a stone fireplace exposed beams, pine floors & terrific nooks & crannies. You can create any number of uses within the layout-currently there are 3 bedrooms, 1.5 baths (one newer) & office w/adjoining room devoted to dog care & whelping that includes the laundry area . Features: High Speed Internet, Off peak meter for new hot water heater, manual generator and outdoor phone bell. A recent improvement in 2019 is a brand new roof! You will be entranced w/the wildlife & peaceful serenity of this unique Vt. property. For those wanting to enjoy the woods there is a network of logging roads. An easy drive north or south to all the Villages of Bennington County. Bromley & Stratton Mtns are just 30 miles from here & the property itself will accommodate cross country skiing, snowmobiling, walking & hiking and will connect you with nature & wildlife all without leaving home! 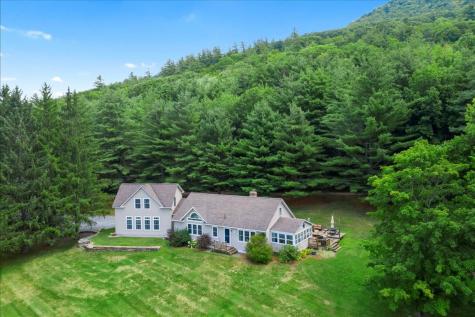 Remarkable Mountain Views! Beautifully updated four bedroom mid century farmhouse on 1.95 acres offer easy single level living. Everyone gathers in the recently renovated kitchen offering a generous granite island, abundance of natural light and view and stainless steal appliances. Sprawling family room with 9 foot ceilings, southern yellow pine floors and expanded widows to taken in all the natural light and mountain beauty. Enjoy another cozy wood fireplace in the living room which continues to the sun room and then to a large outside living space. The first level also features a nicely renovated laundry room, master bedroom, guest bedroom and full bath. On the second level two additional bedrooms with a walk in closet and bath. Beautifully landscaped yard with perennials, stacked stone walls and level drive. Plenty of storage in the full concrete basement. Some say the most beautiful mountain and valley views southern Vermont has to offer. 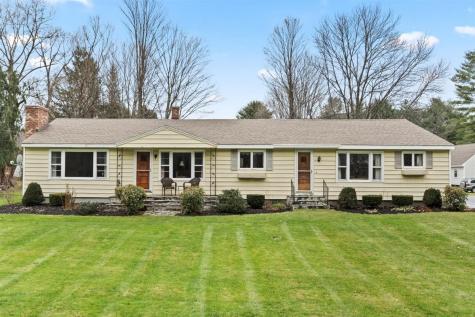 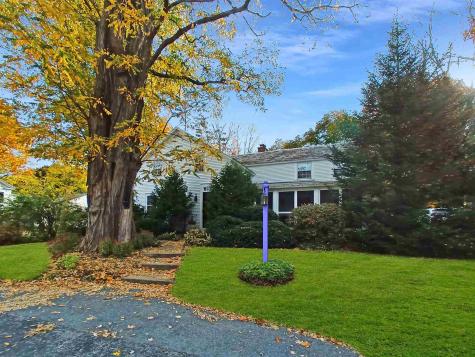 Gorgeous remodeled farmhouse offering great space and location. 4 bedrooms 2 and a half bathrooms, living room with fireplace, updated kitchen with new appliances, formal dining room, family room and den/office. Thoughtful updates and decorating this home is a combination of warm and elegant. Fenced back yard, 1 car garage/barn, great sitting porch, circular driveway and so much more. This is a must see home. 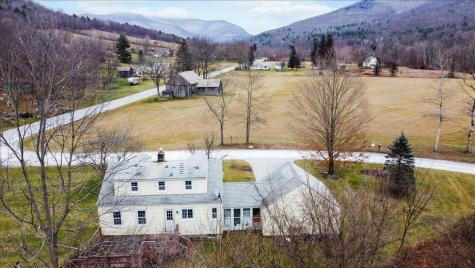 Mountain Views Surround you from every direction! Sunrise to Sunset views of the Battenkill River and mountains. Glorious surroundings paired with a three bedrooms, two bath cape. Open kitchen dining, large living room with wood burning stove/ fireplace, hardwood and softwood floors, enclosed breezeway with new windows, generous back deck, two car attached garage and level lot. Being sold in "as is " condition. Paint and one bathroom needs updating, other that that it is just right. Price to sell under assessment value! 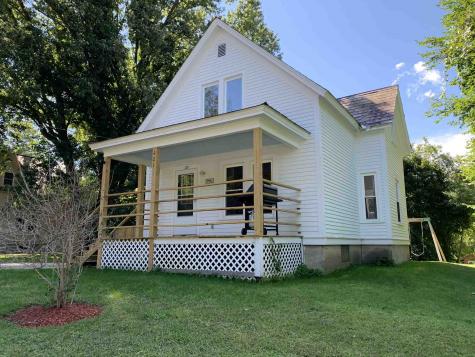 Renovated farmhouse in walking distance of village, parks, and schools. New laminate wood floors and vinyl replacement windows throughout. Covered front porch entry into the living room, with a large opening to the dining room. Galley style kitchen with Stainless appliances and access to both the backyard and basement. First floor half bath off spacious laundry room... washer/dryer hookups also in the basement, so this could be a first floor bedroom or office. Upstairs are 3 bedrooms and a full bath with combination tub/shower. Basement has concrete walls & floor, ideal for storage. Oil fired hot air furnace and brand new electric hot water tank. Town water and private septic (pumped last year). Partial fence for privacy and a sloping backyard with lots of natural shade. Literally pack your bags and move right in! 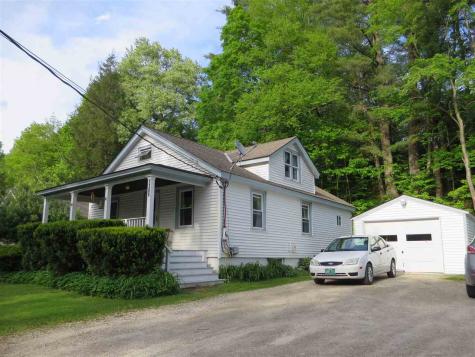 Copyright 2021 New England Real Estate Network, Inc. All rights reserved. This information is deemed reliable, but not guaranteed. The data relating to real estate for sale on this web site comes in part from the IDX Program of NEREN. The information being provided is for consumers' personal, non-commercial use and may not be used for any purpose other than to identify prospective properties consumers may be interested in purchasing. Data last updated January 25, 2021.