Pownal, Vermont is often called The Gateway to Vermont, as U.S.7 which begins in Connecticut and runs north to Canada enters Vermont at the Williamstown, Mass border into Pownal, Vermont. U.S. 7 through Pownal has amazing views of rich farm land in the Valley and the Hoosac River which runs north to New York State from Mass. – Bordered by The Taconic Range to the West and the Green Mountain Range to the East, the Valley and hillside slopes have unparalleled views .

Chartered in 1760, as part of the New Hampshire Land Grants, Pownal has always had a strong independent reputation. There are actually 3 villages: Pownal, Pownal Center, and North Pownal.   After a long period of industrialization in the 19th Century which continued into the mid-20th Century, Pownal today maintains a healthy population of approximately 3,500 people, with longtime residents and newcomers who have made it their bedroom community while travelling to work in neighboring Massachusetts, New York and further north into Bennington County.

U.S. 346 connects North Pownal to Route 22 in New York State. Hikers will appreciate that the Long Trail actually begins at the Massachusetts/Vermont border.  Pownal has its own elementary school, and secondary education is at Mount Anthony Regional High School. Farming, Equestrian Stables, hiking, biking, cross country skiing and swimming at a famous (but not commercial) waterfall/pool are enjoyed by all. For those in the know, driving the numerous back roads over Mt. Anthony in the fall will be the best Fall Foliage drive you can experience. Pownal is surrounded by Cultural Events in the Berkshires, Bennington County, and The Greater Capital Region of New York. 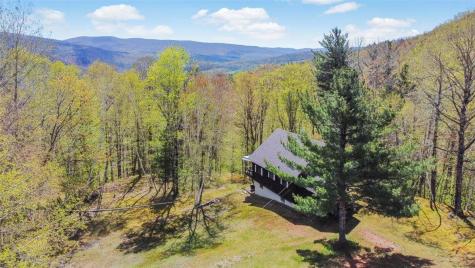 Have you ever just wanted to get away from it all? Not more than 10 minutes from Williamstown and 20 minutes from Bennington you will find an oasis of peace where you can hear nothing but birdsong, a lively stream and the sound of the wind in the trees. On this 162+ acre property, built at the highest elevation allowed by zoning, you'll find a chalet style home with beautiful pine floors, exposed beams and open floor plan with access to a deck overlooking mountain views. Second floor has 2 bedrooms, one with a balcony. Walkout lower level includes kitchen/living and bedroom with 3/4 bath. In addition to the house there is a detached 2-car garage and playhouse. But it's really about the land which includes $100,000 worth of harvestable timber and a natural groundwater spring that provides a significant amount of cold, clear water. Over 200 years ago, a sheep farm made its home on these slopes and today the property provides the opportunity for life completely off the grid if so desired. A special property, the likes of which does not often come along. 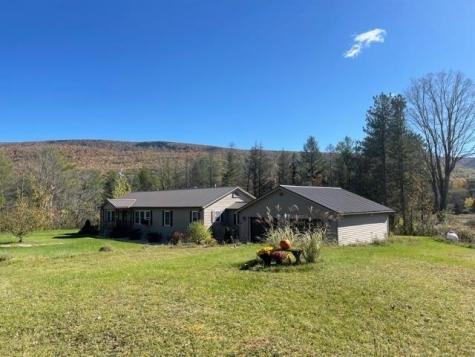 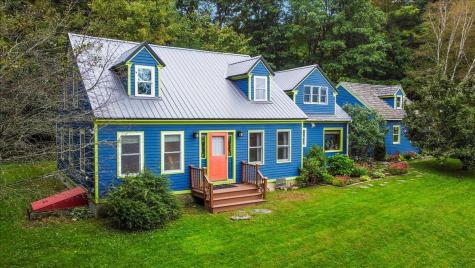 Artistry flavor to this New England cape style home nestled in the mountains of southern Vermont, just a few miles tot he New York or Mass state lines. Quiet Country setting on a town maintained gravel road overlooking fields and forest and mountains, just what you would desire in a Vermont home. Spacious and bright eat-in kitchen with utility and pantry area off the deck. A cozy family room with fireplace, loops around to a den that was once a bedroom could be a first floor bedroom option. This space has a glass door to the back yard and also is open to the large living room. First floor full bathroom has a custom tiled sink. A formal dining room in between living room and kitchen gives the house great flow, but the French doors offer quiet space as well. Upstairs is a master bedroom and bathroom with walk in closet. The custom tiled shower and sink are one of a kind and the large soaking tub is lovely. Two more bedrooms with unique layout and another full bathroom complete the second floor. Full concrete basement with a finished office space and plenty of storage. deck in between the house and garage wraps around the back and is perfect outside entertaining area. Oversized two car garage with storage above. Back lawn is easy to maintain as the rock ledge hedges in like a natural fenced in area. Wooded area to the south and sunrise views from the front door. 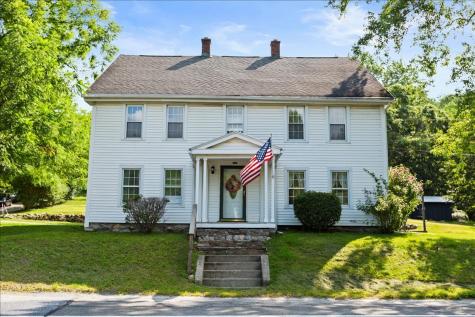 Own a little piece of history and part of two states! Built 1780 Esquire Ware's Tavern is right on the state line. A famous spot for clandestine marriages for Berkshire and Bennington couples. In the same family for decades, it is now ready to pass on to the next care takers. Classic center hall colonial with spacious rooms and many built ins. Beautiful refinished Wood floors sitting in your living room, you are in Vermont and Massachusetts! Updates including brand new insulation, newer heating system, updated windows and siding, and mostly refinished walls and fresh paint. Master suite includes large closets and marble tiled bathroom with shower and plumbed for a soaking tub as well. Third floor has two more bedrooms, but not updated and currently used for storage. Beautiful lawn and mountain views. Guest house out back is a single wide trailer currently rented to family. Could stay or could be removed, your choice. Because of the unique location, you have Williamstown utilities(water, sewer, cable, electric) and a tax in both states, therefore one can choose Williamstown or Southwestern VT Schools.

Private log home sitting at the end of a road. Perfectly positioned on the top of the hill to take advantage of unique and gorgeous views. Featuring an open floor plan, living room, dining room and kitchen area. 2 bedrooms and a full bath also on the main floor. The prefect deck and screen porch also take in the amazing views and connect with nature. The basement features a finished family room (currently setup as a 3rd bedroom) that walks out to a concrete patio. A shed/barn for extra storage and a private location complete the package.

Well maintained 2 bedroom home with an open floor plan. with sliders leading to the deck in a very private setting just minutes to shopping and local attractions. Enjoy those winter night by the wood stove and the summer evenings by the water enjoying the Grey Heron flying in as well as the other wildlife in your own personal wildlife refuge yet just 15 minutes to Bennington and Williamstown. There is a 2 car attached garage with extra storage space and the third garage space in in the back with enough room for a project car or toys. 3.5 hours from Manhattan and Boston 1 hour from Albany airport. Don't miss out on this gem, not a drive by for sure. The center of the house was built before 1978 although the town records indicate 1989 the sellers believe that is when the renovations/additions were done. There is a sellers lead paint disclosure attached 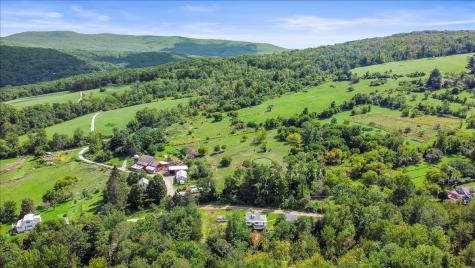 Absolutely charming late 18th century farmhouse, built in 1795, set on 6 acres with a babbling brook, lovingly maintained by the same family for two generations, is ready for you to begin making your own priceless memories. Quiet country road, lush acreage for gardens, 2 car garage, covered porch and a deck check off even more boxes for the ultimate country home or retreat. Important updates such as insulation, new septic, vinyl windows, 1st floor master bedroom, an updated 3/4 bath and new appliances make this adorable homestead livable as is and provide a solid foundation for your own aesthetic touches. The tranquil setting will instantly make you feel a world away but you're only a hop skip and a jump to restaurants, culture and shopping in both Williamstown and Bennington! 1 hour from Albany Airport, 3 hours to NYC and Boston. Be sure to take the virtual tour, then come see and fall in love! 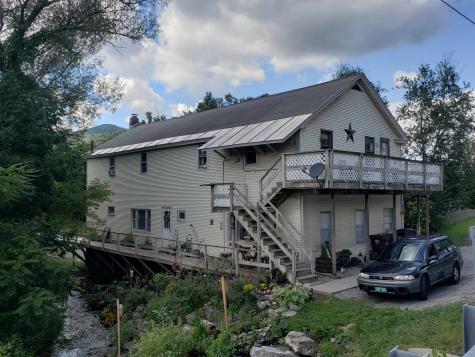 This is a strong investment opportunity. This 4 Unit building offers 3 1br units, and a 1br with a bonus room. Currently fully occupied. The building has been well taken care of and a strong rental history. A large, flat back yard is used by the tenants as a gardening space and recreation area. Financials available upon request.

Listed by Will Paquin of Maple Leaf Realty 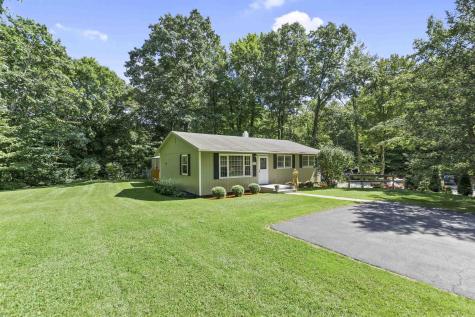 Sweet 3 bedroom, 1 bathroom Ranch with an under 1-car garage. Everything you need for everyday is on the main level -- kitchen, dining, living room, all 3 bedrooms, linen closet, and a full bath with laundry. Outside you'll find an awesome yard with a deck and small fenced area - great for pets! They once had an above-ground pool, so the electrical hookup is still there. Seller is willing to leave the screened gazebo, so that's another bonus! Basement has workshop, utilities, separate storage room, and a large room that could be an awesome home gym, crafting space, or rec room. New boiler (Weil McLain Gold) installed Fall 2020; this energy efficient model used just 600 gallons of fuel oil for heat & hot water all year. New water softener installed in 2019. Septic was replaced in 1991, most recently pumped and visually inspected in 2019 by All Out Waste. T-111 siding, shutters, gutters, and attractive landscaping. New vinyl replacement front picture window has already been ordered from RK Miles and will be given to new owner (if not installed before closing). Currently served by Comcast high speed internet, cable & home phone. Pace is private road; neighbor maintains it, seller contributes $300-400 per year, plus buys the salt. Located in a rural neighborhood just a 10 minute drive from downtown Bennington and 20 minutes to Williamstown, MA. 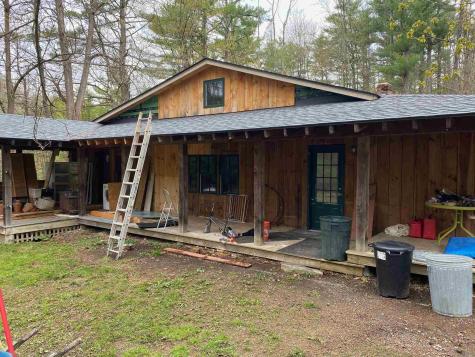 Unique property including 2 dwellings, garage and shed on 8.40 acres. Main house had a fire and repair is partially completed. In-Law dwelling is currently being lived in but only partially completed. Septic permitting is pending for second building. Cash or Rehab loan only.

Three building lots on North Mann Hill Rd. You could build a home on 12 acres... or keep one and sell the others... or develop all three parcels, which are already surveyed and subdivided. Spectacular tri-state views of the mountains and valleys. Exposure is primarily south and west... think of the sunsets you'll be able to watch from this premiere setting. Located just off US Route 7 for an easy commute to Williamstown, MA or Bennington, VT. Lot #1 is cleared; Lots #2 and #3 are wooded, so with clearing they'll share the same incredible views.

Copyright 2021 New England Real Estate Network, Inc. All rights reserved. This information is deemed reliable, but not guaranteed. The data relating to real estate for sale on this web site comes in part from the IDX Program of NEREN. The information being provided is for consumers' personal, non-commercial use and may not be used for any purpose other than to identify prospective properties consumers may be interested in purchasing. Data last updated October 24, 2021.