Old Bennington today is a graceful village of historic homes from the Revolutionary,
Antebellum and Victorian years of our country. The entire village was designated a National
Historic District in 1984. The dominant architectural style is Federal and homes built later, into
the 20th century also favored this style.

Directly across from the village green lies a remarkable cemetery of Revolutionary War heroes
as well as other notable’s including Robert Frost and his immediate family. The Old First Church
was restored in 1937 using the original plans of its master builder and architect, Lavius Fillmore.
The first minister of this Congregational Church was Rev. Jedidiah Dewey and his home still
remains in the village along with the homes of many other early settlers and leaders of this
village. It was the first church in Vermont.

Chartered in 1749 and settled in 1761 we owe a debt of gratitude to Captain Samuel Robinson
who discovered Bennington when he mistook the Hoosac River for the Hudson River upon
returning with his soldiers from exploration of “The Wilderness” known today as Vermont.
Governor Benning Wentworth of New Hampshire had been charged by King George to settle
this territory and Bennington was the first grant given and named after the governor in 1749.
Endowed with natural beauty, located on a wide plateau west of the town of Bennington, Old
Bennington has become a remarkable place to own a home.

When the post office officially made the move in 1848 to the valley, Bennington on The Hill or
Bennington Centre became Old Bennington and Bennington was reorganized. Old Bennington,
over time, took advantage of becoming a residential village as businesses followed the commerce
down the hill. It is quite unique that now, Old Bennington is limited to residential zoning with
some home occupations.

One outstanding example of bygone days is reflected in the
Walloomsac Inn which had originally been the home of Jedidiah Dewey’s son Elijah and still
stands, though closed to the public. A few other grandfathered businesses remained but are no
longer there. The grandest feature of all is The Bennington Battle Monument, commemorating
The Battle of Bennington, a significant turning point in The Revolutionary War.

There are 97 residences mostly on 2+ acres of land with sidewalks shaded by tall trees. We
highly encourage you to get a feel for the village and its history by walking from the Old First
Church and cemetery up Monument Avenue, stopping to read the commemorative plaques
recognizing our heroes in the Revolutionary War and ending at the Bennington Battle
Monument.

If you cherish history and elegant historic and vintage homes you must put this village on your
list of possibilities.

Hoisington Realty is pleased to provide the following Old Bennington Village Real Estate listings. If you don't find the property you seek here, or if you need more information about Bennington, Please contact us.

This landmark inn has a stellar reputation as a premier lodging and dining venue that spans 60 years. Each of the 11 guest rooms is creatively decorated and attractively furnished with an artistic flair for color and texture in fabrics and wall coatings. 7 of the guest rooms have gas or wood-burning fireplaces. The present owners have extensively renovated the inn over the past 16 years taking great care to maintain the integrity of the inn's historic architectural features. The result is an exceptional blending of vintage architectural features and contemporary guest room and bath design. Manager's apartment onsite. Owners' 7 bedroom Greek Revival home located across the road is available for purchase separately. This inn has a long, successful track record of being a reliably strong financial performer with an annualized occupancy rate over 60%. Currently operated as a high end Bed & Breakfast Inn, a successful, fine dining restaurant was operated onsite for decades. All licenses, fixtures and equipment are in place to reopen the restaurant should new owners choose to maximize the use of this superb facility.

This exquisitely appointed circa 1913 mansion is privately situated in the prestigious Historic District of Old Bennington amidst 11 acres of parklike grounds. The mansion has been masterfully restored and updated with an eye to preserving its period architectural features. The first floor features an intimate living room with wet bar and wood-burning fireplace, a spacious formal dining room with wood-burning fireplace, a stunning conservatory with brick floor and two walls of divided glass windows and French doors. This property boasts a fully equipped commercial grade kitchen with a spacious footprint. A great space to create your dream kitchen. The 7 of the 12 bedrooms have gas or wood-burning fireplaces and individually controlled heat. En suite bathrooms are tastefully updated. An in-law apartment and 2 cottage suites offer the opportunity for multi-generational living. The property has operated as a highly successful inn for decades providing new owners the opportunity to continue the lucrative inn business or to rent the cottage suites and in-law apartment for supplemental income. Large out-building has possibility to be an oversized, two-car garage with structural upgrades. The stylish furnishings are included in the sale subject to a short list of exclusions. This property can also be purchased together with the Greek Revival home located directly across the road. See MLS #4840013. 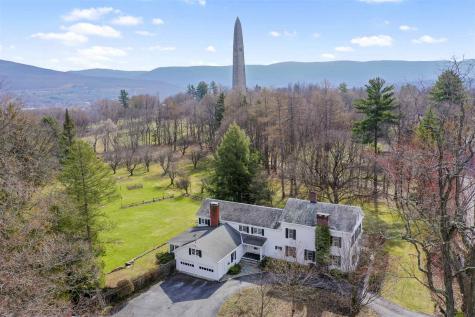 C. 1845 Greek Revival originally built by Deacon (of the Old First Church) John Robinson. This home is graciously appointed and meticulously cared for with views of the Monument and the mountains. The 7.2 acres include mature apple trees, stone walls, a small pond, a barn and gorgeous gardens. The home features a bright living room with a fireplace, wood floors and a wall of windows to take in the views. Down the hallway is a sizable dining room for entertaining with views to the south. The kitchen has updated appliances and has a great Butler's pantry for all the extras. Large mudroom off the kitchen which flows into the family room that has a wood stove insert. A private office to work from home and a half bath. Upstairs has five bedrooms and 3 baths including a private master suite. Attached two car garage, large screened in porch and deck. The carriage barn includes a workshop area, storage for the tractor and studio space above. This property is a must see!!! 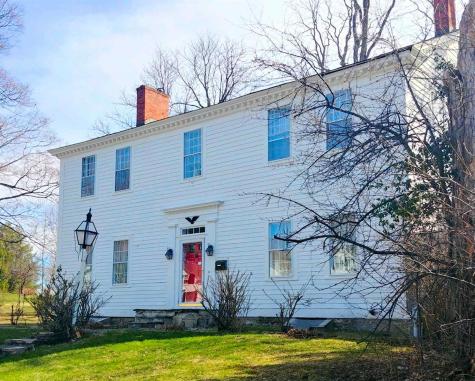 Built by Pliny Dewey in the early 1800's, the Son of the First Pastor of the Old First Church. This beautiful Center Hall Colonial has been tastefully restored retaining many original features including 4 fireplaces, one of which came from the State Arms Tavern once located on the site of The Bennington Monument. Stunning and tastefully appointed kitchen with soap stone countertops and Butler's pantry with prep sink. Dining room boasts beautiful wainscoting repurposed from the original pew doors of The Old First Church. Offering 4 large bedrooms (2 on-suite) and 4 baths (2 with original clawfoot tubs). Much to love with this Old Bennington home with handsome foyer, bright light filled library, and hardwood floors. Elegantly situated on 3 acres with mature landscaping. Beautiful walking trail behind the property owned by the Bennington Museum. A perfect location in the village with easy access to NY and MA.

Large home in highly desirable historic neighborhood of Old Bennington. Was originally a single family home but currently is setup as a 4 unit. Would take a little work to convert back to a single family. Grand columns, lots of space, large porch and so much more. 7 total bedrooms, 5 and half bathrooms, many possible layouts. Offers 1.56 acres and 4 car detached garage.

Copyright 2021 New England Real Estate Network, Inc. All rights reserved. This information is deemed reliable, but not guaranteed. The data relating to real estate for sale on this web site comes in part from the IDX Program of NEREN. The information being provided is for consumers' personal, non-commercial use and may not be used for any purpose other than to identify prospective properties consumers may be interested in purchasing. Data last updated May 13, 2021.